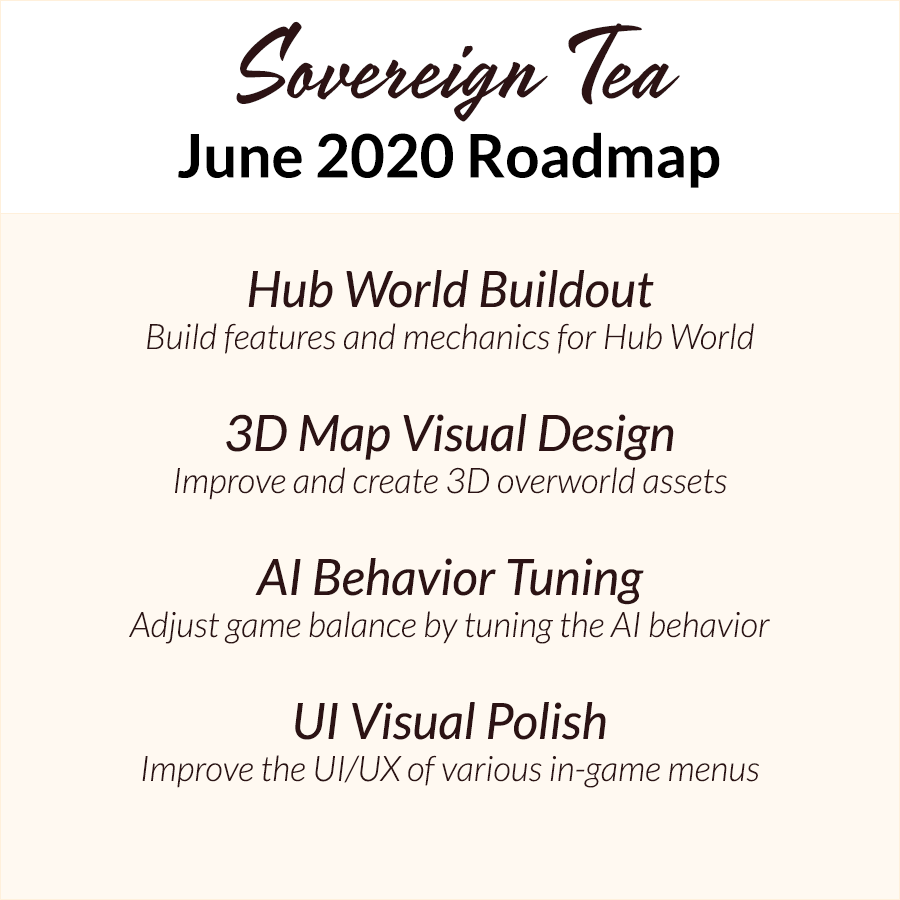 What a month it's been for the development of Sovereign Tea! We have so much to share with you. Let's get right to it.

Masala Chai is a Black Tea Princess, the second of three revealed. While she will make an appearance in the coming beta build of the game, she will not be a playable character until the final release. This is because the Black Tea Princesses are intended to be late-game characters. Regarding the overall level pacing, here's what you can expect:

While our current jump from 3 to 8 is significant, going from 8 to 25 is understandably more impressive. We are fully confident with this plan because as the game continues to be built, the number of new features becomes less and less. Late development is about balancing, polishing, and testing, with far less emphasis on feature implementation. This current jump, from 3 to 8, includes many new pieces of functionality, such as the previously discussed Status Effect system, which simply were not present in the past.

Regarding the narrative of the game, we are confident that our decision to not allow the Black Tea Princesses to be playable in the next build is the right one. The story beats have been crafted around this idea, and exist to reinforce gameplay as best as they can.

In the previous release, while you were always capable of using resource tiles to brew units, the enemy AI conveniently never did so. Starting in the fourth level of the coming Beta, the level immediately after the third level of the prior Alpha, the enemy will begin to brew its own minions to counter yours. This is something we've always planned for from the inception of the idea for this game, and it is an extremely cool feeling to see it come to life. We cannot wait for you to see it for yourself!

The alpha had two victory conditions:

The next build adds a few more:

Those new win conditions do hint at some combat scenarios that will come up, don't they? We're not saying anything more beyond that for now, but hopefully you enjoyed this little tease!

Below we will detail the top-level goals we have for the month of June. The overall goal is to get the next release of the game out in July.

We mentioned before this idea of a hub world. It is a map you return to between levels where you can rest, interact with princesses, and more. Those of you who played the previous release may remember the concluding moments, where the White Tea Princesses decide to build Fort Steep within the territory of the Coffee Empire. Our Hub World is Fort Steep. Here, you will be able to do the following:

Needless to say, this is one of the most exciting non-combat features coming to the next build.

The new levels take place in new locations. One takes place entering a canyon. One takes place on a boat. We need visual assets to support these locations, and it's something we will be focusing on for the month of June.

Is the AI too hard? Is it too easy? We want to adjust the enemy's behaviors to make the game as fun as can be. There isn't too much more to say on this.

As you can imagine from the above, there is a lot we have ahead of us to improve game clarity and communication of concepts. We want to stay atop of things and ensure that the menus look and feel great.

Are you excited about what's to come? We sure are. If you're hyped about the coming release, we encourage you to connect with us on social media! Please follow us on Twitter, Facebook, and Discord to let us know your thoughts about the game. Thanks for reading!