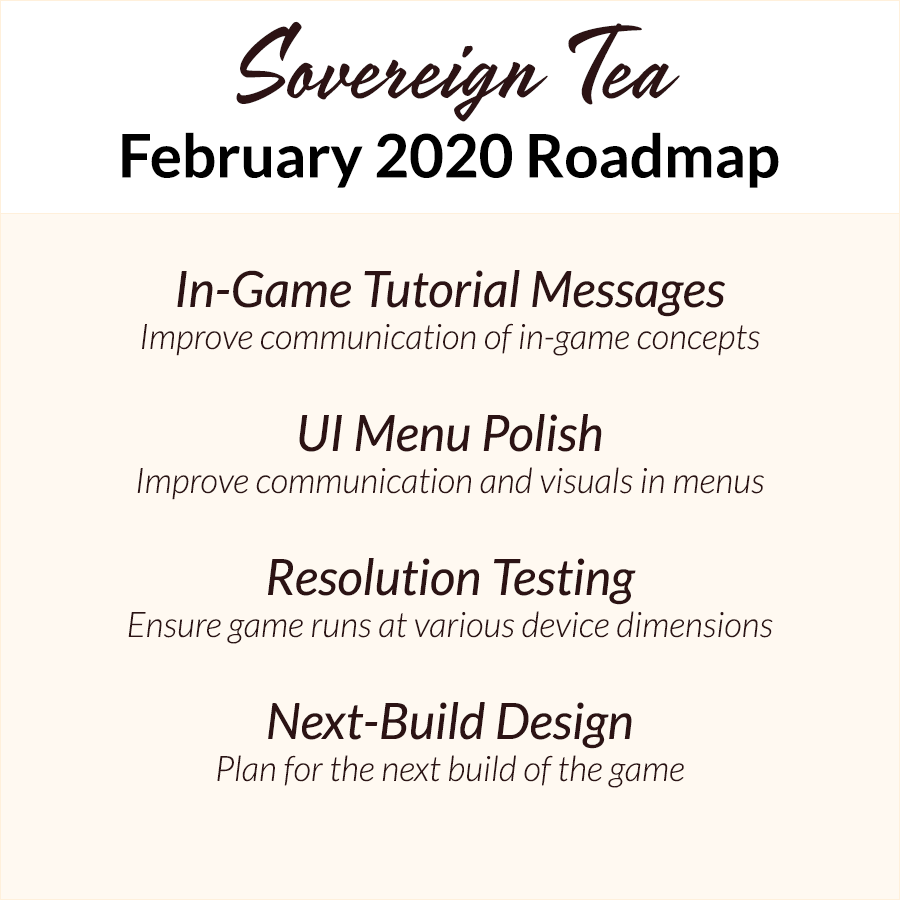 The short month is upon us, so let's celebrate with an enormous devlog update! To start things off we'd like to thank you all for being so supportive of Sovereign Tea. Seriously, it's been a pleasure seeing how excited everybody is at the sheer thought of a Tea VS Coffee strategy game like this. Before we talk about our month's goals and before we talk about last month's goals we would like to provide the following announcement regarding the next build:

When the Q1 build launches we will be increasing the price of the game as discussed on our main page, from the current price of $7.99 (USD) to $8.99. The new build, our Alpha Release, will contain the first three levels of the game. In them, you will play as our three White Tea Princesses: the elegant Bai Mudan, the aggressive Silver Needle, and the lethargic Shou Mei. All our work is leading up to this release and providing the tooling and systems necessary for it to succeed. Upon the release of this Q1 build, we will immediately work on the next build, which will have less of a focus on game framework engineering and much more of a focus on content. That build when it releases in Q2 will see another prices increase, this time to $11.99. All of this information has been communicated on our main itch page since the game page first went live, we just wanted to reiterate this before moving forward.

Having said that, let's take a look at how we did on our January 2020 goals: Full Systems Integration, Gameplay Balance, Audio Production, Art Production. 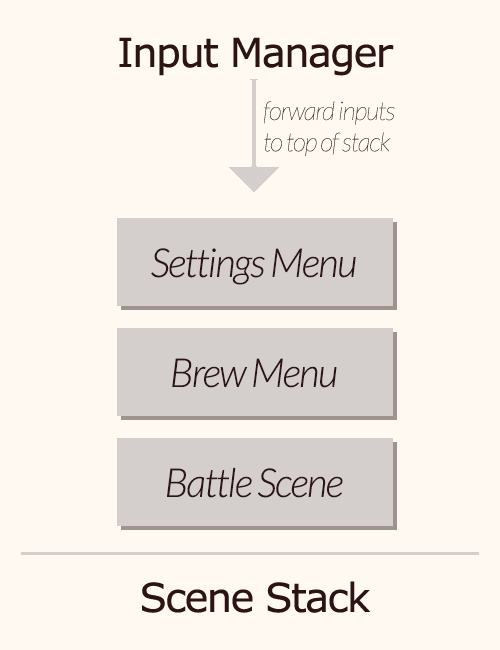 The above diagram showcases a small bit of logic in how our systems integrate. Every major system can be thought of as a manager of some sort. Some managers must be available throughout the lifetime of the application, such as the Audio Manager, the Save Manager, and the Input Manager. Others only exist conditionally based on the context the game is in. These are called Scene Managers. The game can be broken down into many, many scenes: Battle, Dialogue, Settings, Brewing, Title Screen, Credits Screen, and more. Some scenes are additive and can be rendered atop of other scenes, whereas others when loaded must overtake whatever is already loaded. To represent our scenes, we use a simple abstract data type: a stack.

The Input Manager is the only place in the game that can read user input. It abstracts the exact way it processes inputs, hiding details of origin, and simply notifies the top of the scene stack to process an input. This simple setup allows us to avoid a lot of complications in game logic code and keeps input state code within each individual scene very simple. A good example is in the diagram above. Let's say you're in a battle and take an action to make a new unit. This opens the Brew Menu, an additive scene that sits and renders atop the Battle Scene. From here, inputs will be entirely forwarded to this new scene and the Battle Scene will not receive any updates, effectively blocking further inputs. From this new scene, let's say you hit the escape key to open the Settings Menu. The Settings Menu, also an additive scene, now sits atop the Brew Menu, which sits atop the Battle Scene. Input will now forward to the top of the stack: to the Settings Menu.

When I close the Settings Menu, the top of the stack becomes the Brew Menu, returning us to our context prior to opening the Settings Menu. Closing that brings us back to the Battle Scene, where we were at the very beginning. This setup is simple but highly effective, and has allowed us to spin up a great number of necessary scenes without much work. Even better, these scenes all exist independently, allowing us to call on them whenever needed. Need to start a cutscene while in battle? Easy: open the Dialogue Scene atop the Battle Scene. Need to start a cutscene from the main menu? Do the same thing: open the Dialogue Scene atop the Title Screen Scene.

Sometimes you do need to shuttle data from one scene to another. We do have a thin layer that can connect all these pieces via our Game Manager and our Save Manager, but our philosophy in design is to use those as sparingly as possible. The more decoupled our managers are, the less headache we create for ourselves down the line.

Art-wise we're still proceeding as before. Here are some enemy coffee units to take a gander at! As always, things shown are WIP until they aren't. For music production, we're once again working with John Leonard French as our composer. For the coming build we're anticipating a handful of unique sound effects as well as two unique battle tracks. More and more will be added as we move forward with the development of the game.

That leaves us with the last part of our January update: level design. Left-to-right you can see a few quick sketches of iterations on our very first level. The one on the left was the one presented in the initial v0.1 build of the game. It was small because we lacked a camera system at the time, and it only served to briefly showcase what was possible in the game. It didn't convey the core gameplay concepts we wanted to share, however, so we wished to greatly change it. Our game designer, Andrew, decided to share his thoughts on the subject.

Approaching the level design for Sovereign Tea has turned into a really iterative process for me. Like, we start with a question (since we've been designing early levels, that question is usually "what do we want to teach the player at this point?"), and then craft a layout of enemies and define the actual space of the level that we think will result in the kind of play we want to incentivize that lesson. Sometimes it works, and we can start tweaking things like the economy and unit balance on that stage. Other times, it's more like, "Oh, this sucks here, but it does something cool that I think we could use in another level." It's really cool being at this early stage of the design and sort of learning things about the game we've built while we're building content for the game. 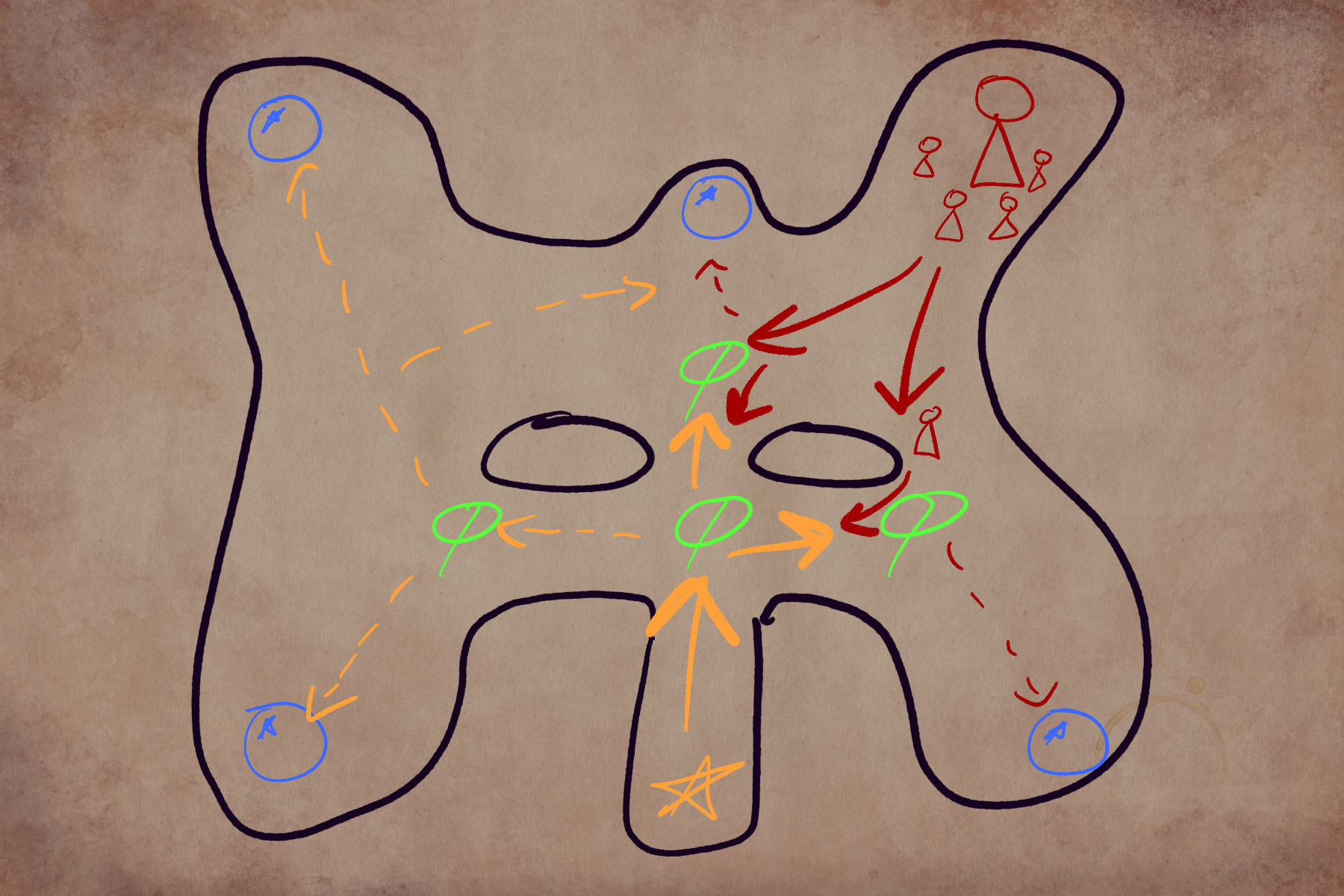 With the new first level of the game, we imagined a play style as such: capture the center territory of the map, full of resources that enable your brews, and defend against the coming wave of coffee units on the Eastern Front. Meanwhile, the West is open and free, so use speedy scouts to capture the faraway rarer blueberry resources to enable new brews to finish off the Coffee Empire's first advance. It's a simple flow, but a fun one that reinforces the lessons we wish to teach for the level. Each of the three levels we plan to show focus on a specific lesson we want to convey on how to play our game:

Now that we've wrapped up January, it's time to finally talk about our February goals! 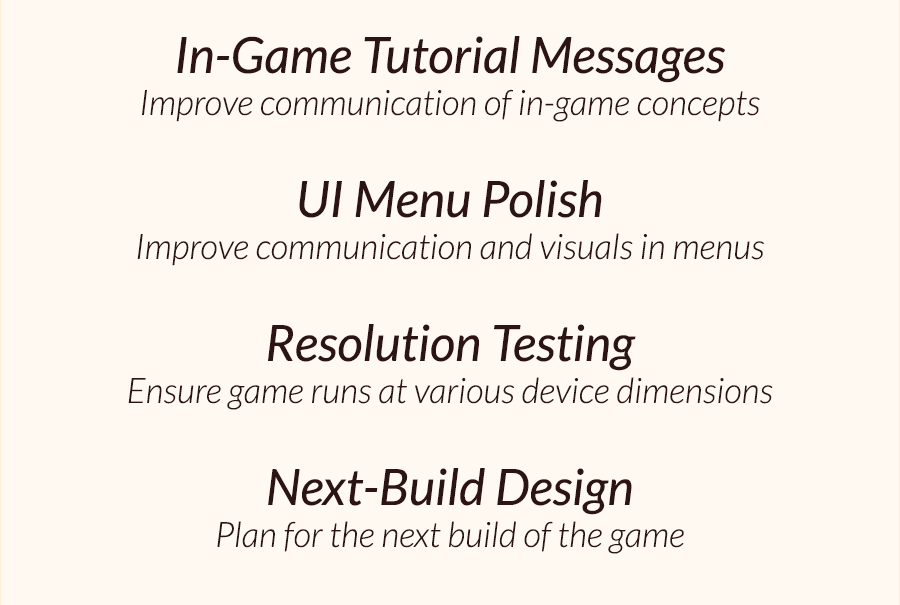 Let's face it: nobody likes tutorials. We of course want to avoid as much hand-holding as we can when it comes to our games, but feedback from early playtesters has revealed that a little nudge in the right direction goes a long way. We will develop a system to deliver very brief, quick messages to the player the first time they encounter specific scenario, but no more beyond that. We won't tell you exactly where to place units and we won't gate you into those decisions, either.

We have all the systems and scenes we need for the game ready. The only problem is that a lot of them are ugly as in. This is what happens when you let a programmer make your scenes! We're going to thoroughly do a much-needed UI pass prior to the release of the March build to ensure we meet visual standards.

The game definitely runs fine at reasonable 16:9 resolutions like 1920x1080, 1280x720, but beyond that it's the great unknown! It's not a difficult task to add UI scalers and make the game work at other resolutions, but it is a matter of doing it. We intend to use this month to do just that.

Next-Build Design
Plan for the next build of the game

Did you know that the build coming in March is not the final build? Did you know we have another build planned aggressively soon in Q2 2020? While polish happens for the March build, and while we wait for the final audio assets to come in, we are pushing forward with preparing content for the next build of the game. While the coming Q1 build only showcases three Tea Princesses (Bai Mudan, Silver Needle, Shou Mei), the Q2 will have a lot more, some of whom haven't been announced yet! Our character artist, Elizabeth Jenkins, will be drawing those new character talksprites for the future, while our game designer will prototype new levels and units for the next build. 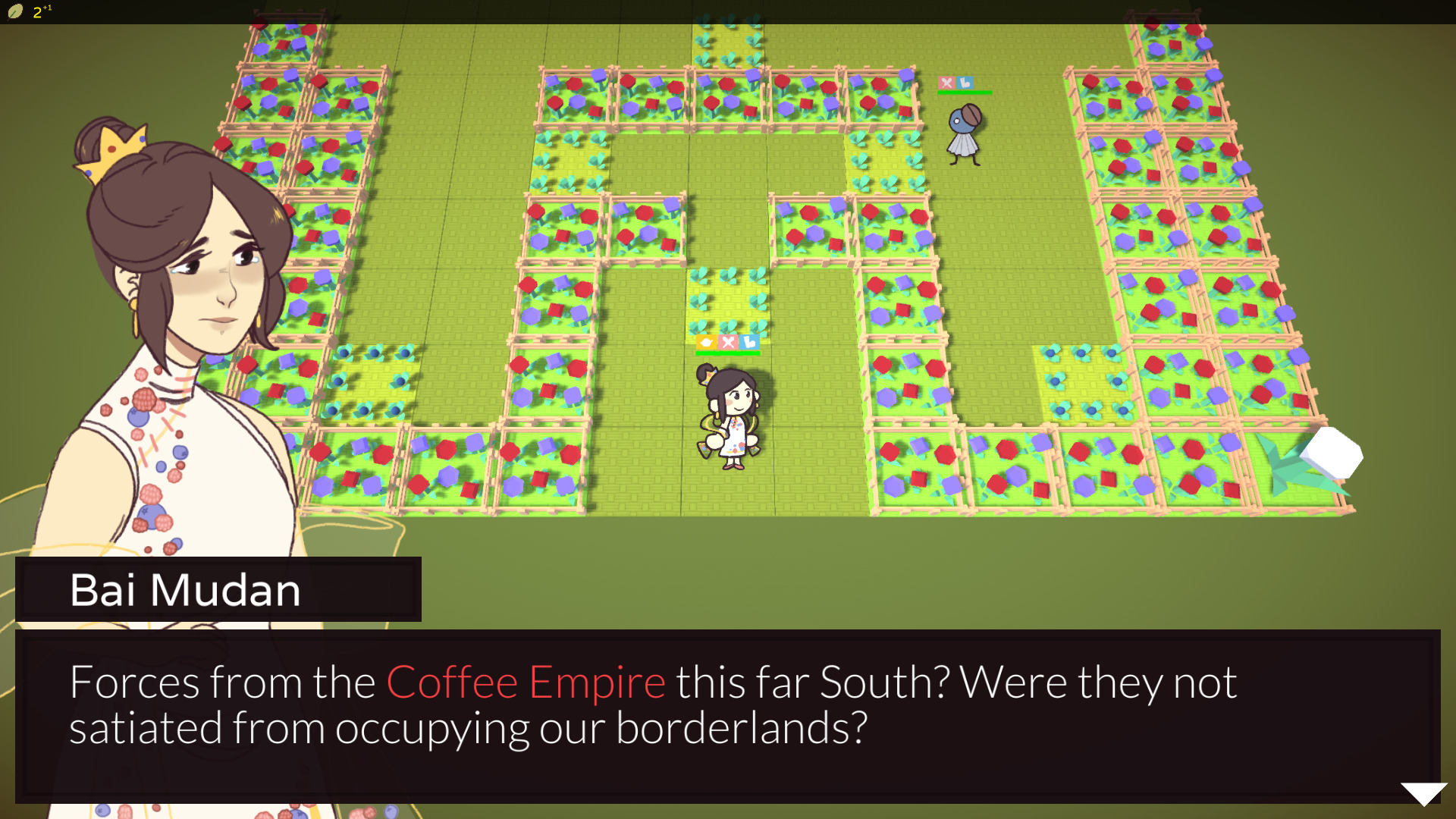 As always, thank you for reading our long-winded devlogs! We hope these are insightful into our design process and would love to hear your feedback regarding the development of Sovereign Tea! Follow us on Twitter, Facebook, and Discord. We'll talk to you all again soon, and get ready to play the latest build next month!