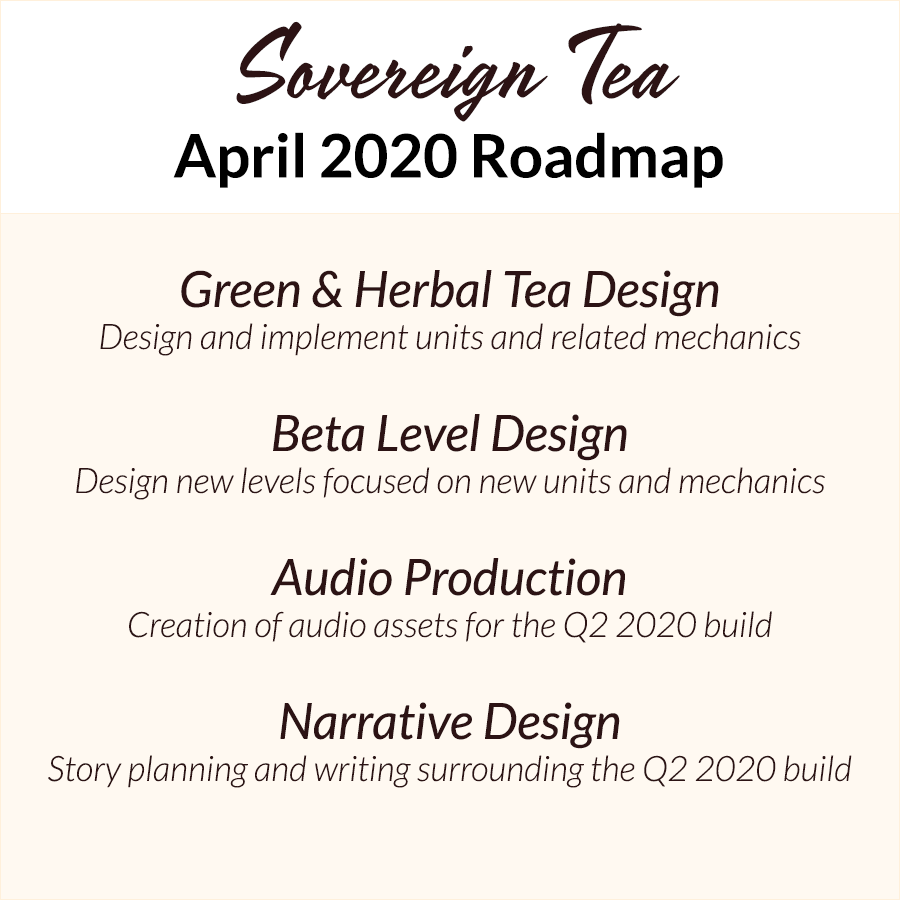 In March we finally released our much-anticipated v0.2 Alpha Build of Sovereign Tea! It's been about 20 days since the release and we have so much more to share with you regarding the progress that we've made, as well as the progress we will make. Now that it isn't April 1st and now that the amount of time we're spending on a virtual island inhabited with animals has reduced from 100% to 75% we feel like now's as good as ever! Let's get right to it.

The alpha build featured three White Tea Princesses: Bai Mudan, Silver Needle, and Shou Mei. When these princesses brew units, they pass unique traits to the units they make. Bai Mudan makes her units strong against high-HP tanky enemies, Silver Needle gives a general attack and speed buff at the cost of health, and Shou Mei's units gain area of effect healing abilities when they move adjacent to allies. In the above order, these three characteristics define how White Tea plays and thus influences the level designs for White Tea units.

With Green and Herbal teas, we don't want the princesses to play in the same way. When designing the princesses, we asked ourselves what we wanted the defining trait to be for that particular class.  To that extent, we wanted to show you a brand new Tea Princess today. Introducing Chamomile!

Gameplay-wise, we want Chamomile to be a status effect-inducing princess where the status effect she induces is Sleep. Status effects are a new concept entering the game in the coming build, but they're self-explanatory for the most part. The status effect system is built separately from the triggerable ability system already in the game, and the two have great interplay. It's up to the player to find the best synergies that work for their given scenarios with their given brew loadouts.

Back to Sleep in particular as a status effect, we currently have it such that a unit brewed by Chamomile will add a Sleep status effect to the unit it hits, rendering them temporarily disabled from combat. This is great when surrounding tanky units with large health pools. As with all things, everything stated above is subject to change. We make changes based on if the final implementation is fun. If it's not fun, we find ways to make it fun. That said, so far this feels pretty fun and very fitting for Chamomile as a whole.

We'll be showing off more characters in the coming weeks. Be sure to look forward to it!

As stated above, status effects as a whole are new to the game and add an exciting new level of complexity. To name a few that we are adding...

Let's talk about Genmaicha's Rice Power. Genmaicha has a resource that only she can properly utilize: rice. Thus, there are rice-based units in the game. The way they work is as such: any princess or structure can make a rice unit, but they will not be very good as-is. They could be leveraged to be useful given a specific princess passive, or merely used as a temporary meat shield, but for the most part units that aren't Genmaicha shouldn't be making these units. When Genmaicha brews a rice-based unit, she provides them the persistent status effect Rice Potential which augments their form and greatly empowers the unit. A good example of this is a currently unnamed tea unit inspired by samurai:

This particular unit we currently have slated to be useful in counterattacking situations, hence the more defensive sword position. Naturally, with such a unique mechanic as Rice Potential, our level design is greatly impacted. It's always a fun dance of balancing priorities on multiple interconnected aspects of this game!

Not much to say on this one. We are in the process of creating more audio and, importantly, more sound effects. We want as soundful an experience as we can muster and we felt what we delivered in the Q1 2020 alpha build wasn't the best we could offer. It will be improved in the beta!

Surprise! More levels, more units, more princesses... it all means more writing! We're pleased to say the entire narrative for the full game has already been fully planned, the intended beats known so that we may build up to them, and so on. Like with audio, there isn't so much to say here. It's just a matter of doing it, and between the gameplay balancing it's something we intend to crack down on in April.

If you don't put VAT,I cannot pay via Paypal...

Do something for non US buyer,please :)

I really would like to buy this amazing game ^^

Thanks for bringing this to our attention. VAT should be enabled now for EU-based clients. Please let us know if everything's working!

Thank you for your support of our in-development title. Feel free to join our Discord if you want to talk about the game with us and the community.