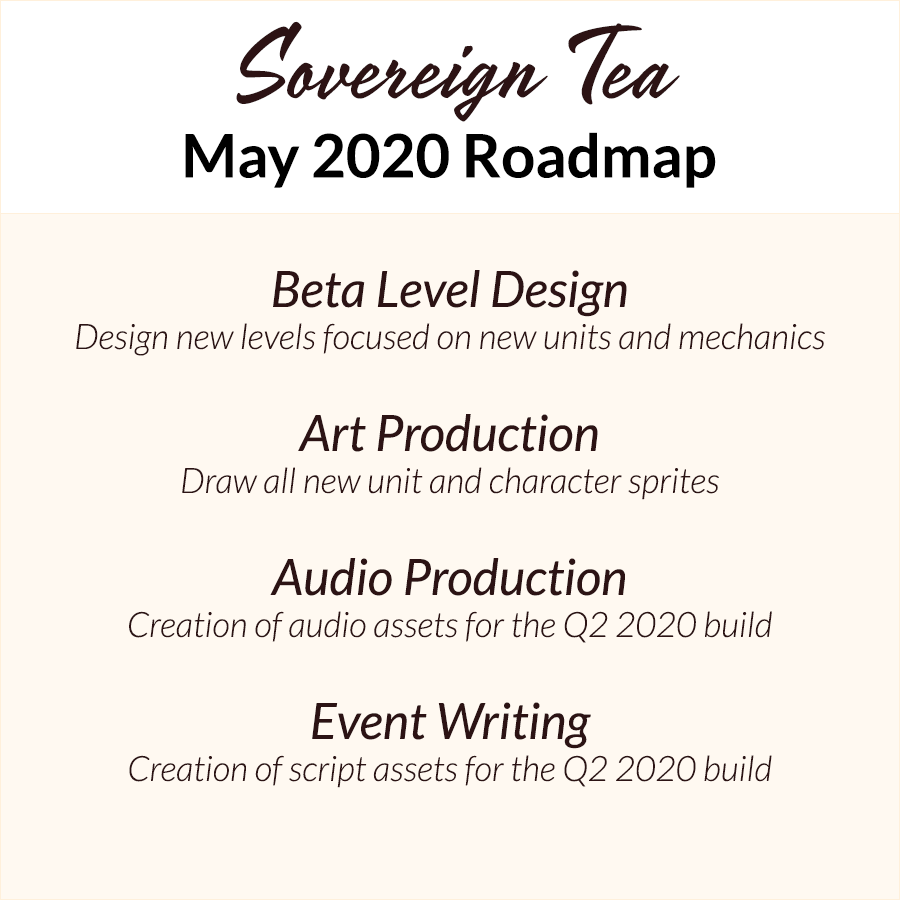 One month of development has come and gone—we're very excited to showcase what we've been up to.

With these two announced, we now have all three Green Tea Princesses known: Genmaicha, Dragon Well, and Mint. Each has their own unique play style and passive effects. As discussed in the April 2020 Roadmap, Genmaicha's ability is that she uses the specialized ingredient Rice to great units with Rice Potential, units that change form based on who brews them.

Dragon Well's passive meanwhile is quite different: for every brew she makes, she gains Attack and Attack Range. Attack Range is a new concept and it represents projectile range.

Finally, there's Mint. Units she brews gain an ability where, if they kill an enemy unit, they reset all their actions and get to take their turn again. This means a Tea Minion can move to an enemy, attack it, kill it, and do its movement and attack actions again!

We're already having a lot of fun playing with these princesses and exploiting their mechanics, and we hope you'll have fun with them, too! That said, as this game is still in development, do note that the above is more how they currently work and less how they will behave in the beta release this Q2.

You might be curious why our choices for the Green Tea Princesses were what they were. First, we want to note that there are many green teas out there in the world: so many that it's impossible to really pick just three to represent the entirety of green tea. That said, our goal isn't to represent the green teas so much as to select ones that would lead to more interesting gameplay.

Genmaicha was chosen over other Japanese green teas like Sencha or Matcha because we believed the reliance of Genmaicha on rice would lead to very unique combat decisions. Dragon Well was chosen over other Chinese green teas mostly due to the name of the tea, a name that invokes a strong offensive-based unit. Mint was selected over other options not only due to its popularity throughout much of the Mediterranean world, but also because it's a tea with heavy reliance on sugar. That last point leads us to the next section...

Sugar is a new resource you can use when you brew your Tea Minions! Units brewed with Sugar typically have a focus on action economy. Units made with Sugar may have Multi-Attack, Multi-Move, Multi-Heal, or some other combination. One unit in particular we'd like to showcase as an example is Ballet Tea!

As it currently exists, the Ballet Tea has no starting attack and a low move speed of 1. However, what makes this unit great is that it can take 6 separate movement actions. With each step it takes, it gains 1 temporary attack. The temporary attack, represented by a new status effect, goes away at the end of the turn cycle.

Gameplay-wise, this means this unit can tiptoe into combat, unleash an attack, and tiptoe out. Alternatively, even if the enemy is close to you, you can simply dance around them multiple times before attacking to maximize your offensive stat. Couple this with already existing passives from Tea Princesses, such as Shou Mei's "heal on move" effect, and you have a versatile unit that can be utilized however you like. Try brewing this unit with different princesses to get different results!

As we move into May let's talk briefly about what we are planning to accomplish. Overall, it's everything you would expect to see in development.

Our new fun units need levels where they can shine! We've locked down our plan on exactly what the new levels will be, what the goals for each level are, and are in the midst of working on those now. This indirectly also means we are already working on gameplay balance and tweaking stats to meet expectation.

With much of the planning phase for the build behind us, we've been moving forward into more and more art production. There are quite a lot of new units in the next build, so this process will naturally take some time. So long as we work on it a little bit each day, as we have been, we'll meet our deadlines handily.

Our composer, one Mr. John Leonard French, has been hard at work on new music tracks for the game. We really don't want to spoil anything here, but the new tracks coming in for the next iteration of the project are very worthwhile. More on this later!

Event Writing
Creation of script assets for the Q2 2020 build

All the new dialogues for the next build have been planned out and a handful have been written. Something the next build has that wasn't present in the previous build: moments where you can optionally witness casual interactions between Tea Princesses in non-combat settings. Internally, we're calling this Hub World. It's an area you go to between levels where you are provided many new features of the game. It's not something we're ready to show just yet, but in due time we will very happily share more details about this. For now, there's still a fair bit of writing left to do!