Hello friends. We have some exciting news about Sovereign Tea to share with you today! We are working on an exciting Halloween Update for the game that will be available in October. While we normally keep our secrets to ourselves, we thought this time around to share more details with you. After all, what's more exciting than dressing up for Halloween?

A New Level... With Prerequisites

We are adding a 26th level to the game. There is a prerequisite to access this new content, however: You will have to beat the game first.

This is a bold move on our behalf, as not everybody has beaten the game yet. Even more, generally speaking, the number of people who beat your game is going to be less than the number of people who play your game. So this begs the question, why produce content that is likely to only be seen by a subset of all players, rather than content that will be seen by everybody?

Narrative is the main culprit. We want this new level to take place after the events of the main game. This cascades into gameplay, as it enables us a wider breadth of units we can use. We'll talk more about that in the next section.

The Premise of the Halloween Update

There are spoilers for the main game beyond this point.
If you have not beaten Sovereign Tea yet and do not wish to be spoiled, back away now.
We of course won't 100% spoil everything, but consider this a fair warning.
Last chance to avoid spoilers.
Still here? Okay, let's assume you're good with spoilers then.

Months after the events of the main game, a Halloween party is taking place! At the party is Silver Needle, the brilliant seamstress who created not only her outfits but the outfits of her fellow party-goers. Among them we of course have Silver Needle dressed as a spooky vampire, Masala Chai dressed as a humble witch, Mate dressed as an elegant angel, Yuenyeung dressed matchingly as a tricky devil, and Matcha as, well, just a pumpkin.

There party is abruptly cut short as Instant, not in a costume, informs the lot of them that there is an emergency at the Milky Woods. New trees, more mysterious and spooky than the ones you faced off against in Level 14, have sprung up and are producing even more dangerous units than ever before. Instant has been trying to rally help, but to no avail.

Though Instant is too exhausted to carry on, it is up to the five party-goers to quickly go to the Milky Woods, plant a large enough force to deal with the situation at hand, and then get back to partying! 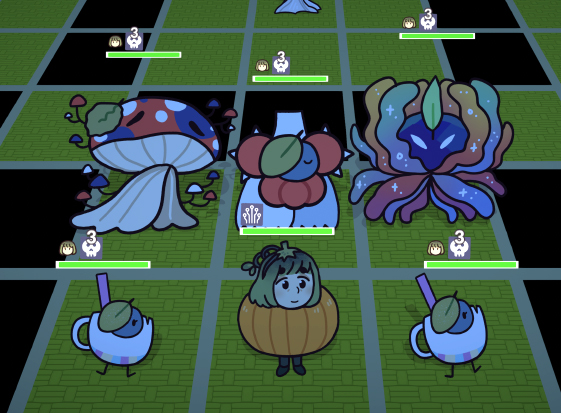 At long last, you will be able to play as a Coffee Regent: Yuenyeung. Being born of both Tea and Coffee, she has of late been at work crafting Tea Minions and thus will be able to produce the same units you're used to. Her Princess Passive this time is different than when you fought her, instead being more tuned to dealing with this level in specific and not so much economic control, as was the case in Level 12.

Matcha is also with you, finally ready to fight once more. Her units are quite strong, way stronger than one would expect from such a tired and timid old woman, but they also are frail. Her units will die after a set number of turns have elapsed.

In this new level, you get exactly one turn to prepare your army with your commanders. However, we are introducing a new status effect to the mix: Prepared. Your commanders will have unlimited Brew and Move actions, but instead will have very limited initial space. With a limited economy and very limited space, you will have to be careful about the units you choose to brew. No, you can't just make 50 Stoma and call it a day. This is very unlike every other level in the game, but we find that the twist leads to new and enticing ways of thinking about this game.

While we sadly don't have art ready to show here, we are working on a number of Halloween-themed units. Here are a few concepts:

When Does It Come Out?!

This October, with ideally plenty of time between its release and Halloween proper! We don't know the exact date yet, but soon enough that we wanted to let everybody know about its existence. In the meantime, stay up to date with all our shenanigans by following us on our various social media platforms. We look forward to delivering a rather cute Halloween story to you soon!