We're back again with a new update to Sovereign Tea! What started off initially as a very simple patch to address a tiny handful of text-related tweaks, internally known as v1.2.1, quickly grew in size and scope. Let's talk about a few of the major changes you can expect to see in the game now, as well as why these changes were introduced in the first place.

We have received feedback from some users that certain unit tooltips were difficult to understand. Among these were tooltips for two units with very unique modes: Refined Fusilier and Lapidarian Mystic. We've updated their tooltips to the above. We also did a mass sweep of all unit tooltips in the game, but the above were the only ones we felt could have been improved.

In general, you will do well in Sovereign Tea if you study the field and read tooltips carefully. Rushing into combat without understanding how units work is a surefire way to lose. We understand that this is different from other games in the genre, but we recommend you take your time with battles and really plan out your strategy. Not doing so will make the game a significantly more difficult experience.

The Problem With Level 16

Speaking of difficult experiences, how about Level 16, huh? Our initial release of the game had a pretty significant difficulty wall in this level, most notably in how the Coffee Regent's Passive, when applied to specific enemies that she could brew, led to an almost unkillable combo. We hastily made a hotfix for this by removing the unit from the prioritized brew loadout for the AI, and to compensate we blocked her off with fully stationary defensive units. This has proven for some to still be quite difficult.

The problem with Level 16 is that players that do read tooltips and theorycraft correctly found it very easy. Hilariously easy. Beat the level in 2 turns easy. Others found it essentially impossible to play, even after the patch. We want those who properly theorycraft to be rewarded for their efforts, but we also don't want the level to be dependent on finding a specific singular strategy.

Our redesign of Level 16 pushes most of the defensive enemies back near the top of the map, as shown in the screenshot above. It makes some adjustments to the lower section of the map by replacing the Mocha Vanguard (5 HP 1 Block) units with just Espresso units (3 HP). Effectively, we're shifting the point in which you need to put your best foot forward from Turn 1 to about Turn 3 or Turn 4. That way, those who are struggling with the level will have more of a foothold with how to move forward.

Incidentally, this level still is capable of being won very, very quickly. Just before writing this I gave it a shot and won in exactly 1 turn brewing exactly 2 units and capturing exactly 1 resource tile. See if you can figure out how I did that! 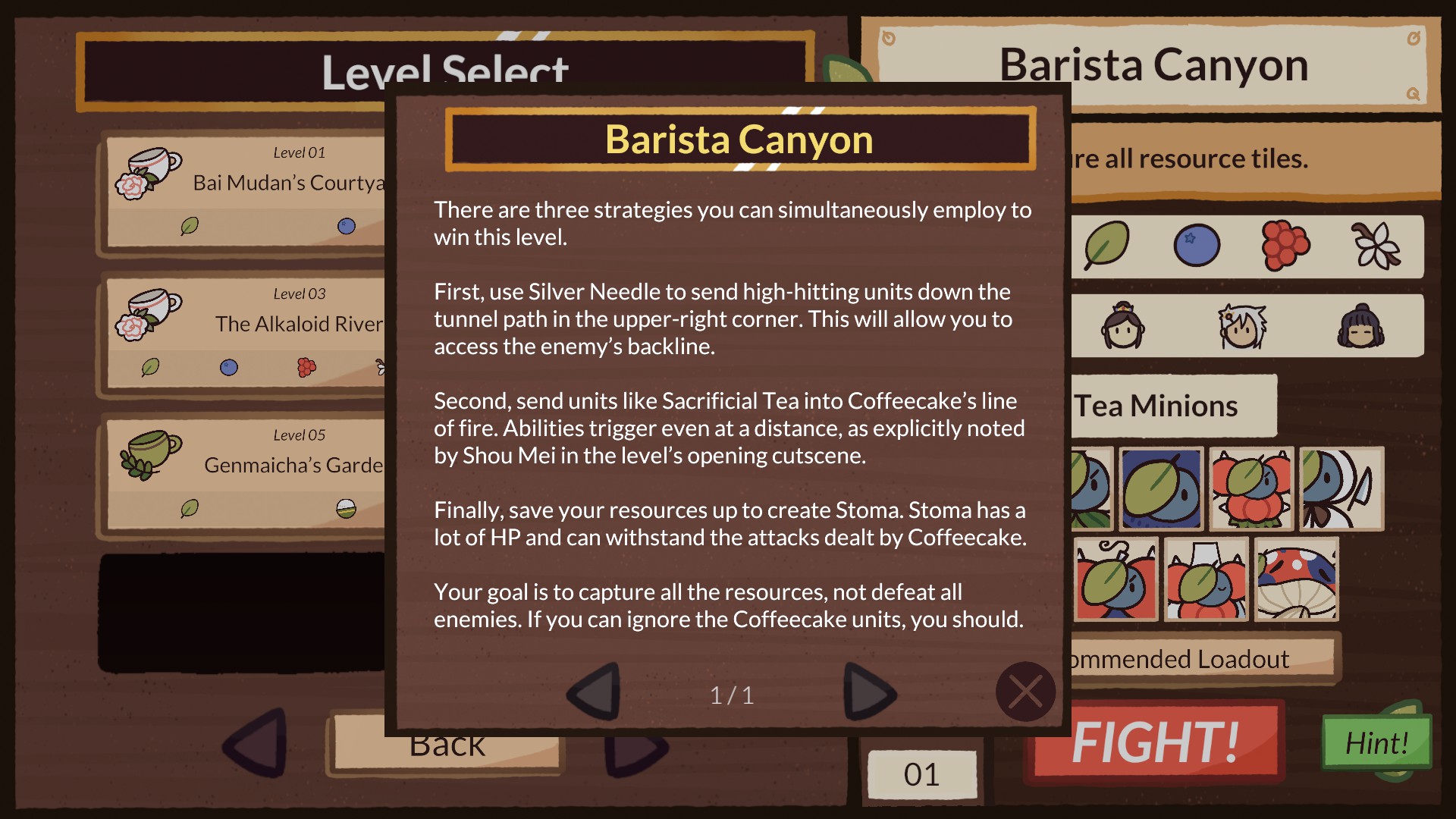 We've watched a lot of streamers on YouTube and Twitch play our game lately. We've observed some pretty harrowing things! Notably, a lot of players who struggle with the game seem to not realize that you can brew from captured resource tiles. In other cases, some users would take 2 actions in their turn and then end their turn early, even in scenarios where they could have taken 10 or even 20 more actions. This behavior, coupled with many who skim or ignore tooltips, leads to a needlessly negative experience with the game. The problem is ultimately on us to solve, so how do we solve it?

We did a few things:

We want everybody to enjoy this game, but we realize not everybody enjoys theorycrafting. Many just want to go through the story of the title with a light tactical experience attached. We hope these changes we've made make the game more accessible for you.

Here is the full set of patch notes for this update:

If you've been enjoying the title and all the support we've given it, please leave us a positive review. We hope you enjoy the update to the game!